NaPoWriMo Day 20: The Atari Relationship. Or How You Destroyed Me

I'm catching up a day.  It'll take a lot if I'm going to catch up on all the other days I missed.  The day 20 prompt was to write a poem incorporating the vocabulary or imagery of a game.

Why didn't I just stick to something I know well like chess?  Or say that Sudoku isn't a puzzle - it's a brain game?  No, not me.  I have to pick on a game I don't know.  A game containing lots of vocabulary that almost nobody would understand if I incorporated it.  Do you know about semeai, tesuji and miai?  Perhaps you do if you happen to know how to play Go.

I wrote something though.  Based on the one word - apart from Go - that I know from the game of Go.  That word is atari - a position in which your stone or group has one remaining move.  You have to take it but after that you will be captured.  If you're in atari you've lost - or at least lost that part of the game. 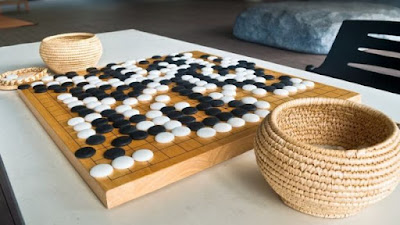 Picture taken from a BBC report here about an AI program beating the European Go champion.  That only happened last year - compare that with how long ago it was the AIs started beating grand masters at chess.

The game of Go does appeal to me in many ways.  There's no luck involved.  The rules are very simple.  The tactics are highly complex.  It seems a very elegant game, a lot more so than chess.  Perhaps one day I'll learn it.  Perhaps too one day I'll return to chess.  I was never great at chess but I was okay and for a while improved quickly in my use of forks, skewers and such skills.

You said it was just a game.
Told me we'd just play together
In black and white simplicity.

We danced apart, eyed each other
Our lines not yet intersecting.
Eventually, inevitably, we met.
Lives colliding on points as
Possible turned to impossible.
I didn't see your truth. Only your beauty,
The way your flame lit every room.

Your smile near satanic, you showed false eyes.
Laughed hideously as I was forced
To climb that first ladder, pushed aside
Into a corner where you broke a piece from me.

I built walls. You cut them down.
I sought escape. You captured me.
You pushed, squeezed, attacked,
Never sacrificed the smallest territory.
I kept wanting to believe your promises.
Wouldn't leave the game. Couldn't leave go.

It's almost over now. Knife to my throat.
Gun to my heart. Just one move to make.
I want to run. There is no field left.
Not even a hole to hide, cowering alone.
One move. Between survival and annihilation.
One last stone to place. All options gone.
Liberty stolen. Manipulated, massacred me.

You look at me and grin, softly coax me
And even now I want to believe.
You love me. You just want to play.
I place the stone. Plead with you to stop.
You, triumphantly howling, make your move.
The ground of battle reverberates hollow.
As you break me one final time.