This is the second post from a walk taken on 27th May.  The route map is here, including all my little diversions while visiting charity shops in Morpeth and deciding what to eat.  The first post was about the walk and how pretty it is.  This one is about some of the historic things to see on the way. 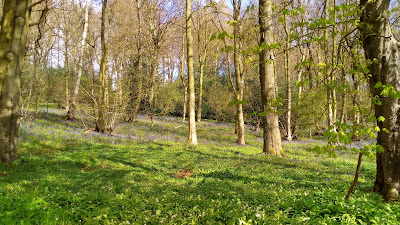 This is the bluebell wood at the western edge of How Burn.

There's a long history of mining in How Burn.  It contains bell pits which were old mine workings and it's thought that the local monks may have worked the mines.  There were 18th century collieries and Howburn Colliery itself was producing coal from the 1860s to the 1920s and had its own tramway.  There are still old mine workings to be found - though the signs say to stick to the footpaths because otherwise you're liable to end up at the bottom of a shaft rather than the top.

This picture is unexciting isn't it?  It is known as Pestilence Close.  Tradition says that people who died in the plague of 1665 were buried here. 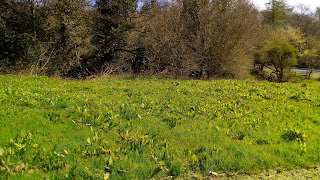 Descending to the river the bend takes you past the sites of a large quarry and a mill before you reach the railway line which crosses the river valley on the Pegswood Railway Viaduct.  The railway between Newcastle and Berwick opened in 1847 but the original bridge was wood.  It was replaced in 1849-50 by the nine arch stone viaduct which was designed by Robert Stephenson. 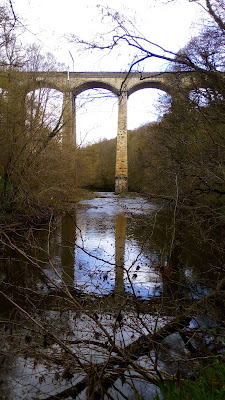 Carrying on you reach this unassuming stone.  The inscription reads "Jubilee Well 1887."  The well was in use before that date but there were celebrations for the jubilee of Queen Victoria and the stone was placed there then.  Really the well was a spring and there are now no signs that it was built up into a well structure. 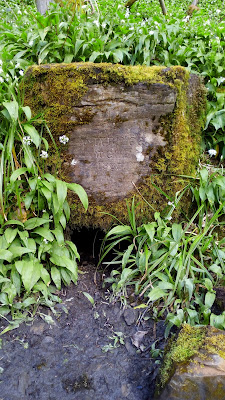 Nearby is this site.  This is the Lady Chapel, or Newchapel, or what remains of it.  It was probably built some time around 1480 as a chantry.  It was abandoned in the 16th century - presumably for reasons connected with the Protestant Reformation in England but restored by the Victorians.  Vandalism over the years means that this is all that remains. 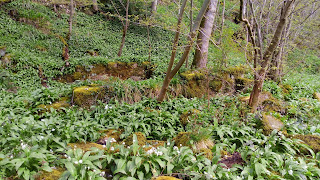 This stone is near the chapel.  The inscription reads "Lady Catherine's Chapel 1752" although it's very hard to make out a date now. 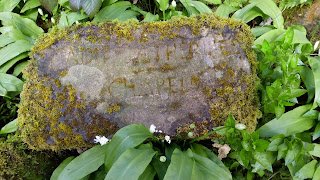 Just above the chapel is the face of a quarry and you can still see engravings there including Latin inscriptions such as Fidelis Servus (faithful servant) and this coat of arms.  This is similar to that of the Mulcaster coat of arms and it's been suggested that the church curate carved it himself when restoring the chapel in 1857. 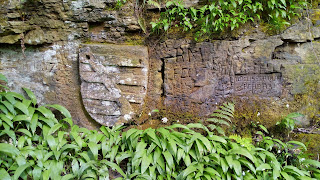 If you're interested, a local history researcher from Northumberland has an extensive and fascinating blog post on the well and the chapel.  It's worth a look for the stories and for the pictures he has of the chapel and well.  Here it is.

Continuing along the river you reach Bothal Mill.  There is still a mill building there but this picture is of the remains of the sluice across the river.  The mill was originally used for grinding corn.  Later it was used to grind bones as part of manure for fields.  For years the river was crossed near the mill using stepping stones.  A wooden bridge was built in 1882 and this was replaced by the current road bridge in 1982. 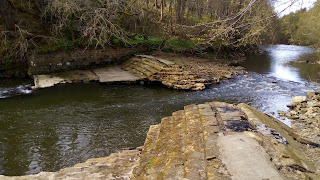 The walk leaves the river and heads up the road until another footpath is found at the top of the bridge.  If anyone can recommend to me the best way to proceed on foot from Bothal Mill eastwards along the river to the bridge at Guide Post please let me know - is there a much better way than following the roads? 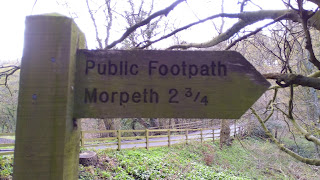 On the return to Morpeth the walk crosses over the railway and fields before descending back through the woods past an old quarry to the river before returning to Morpeth. 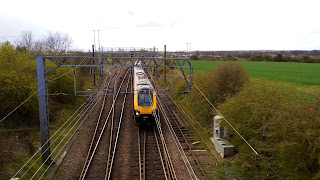